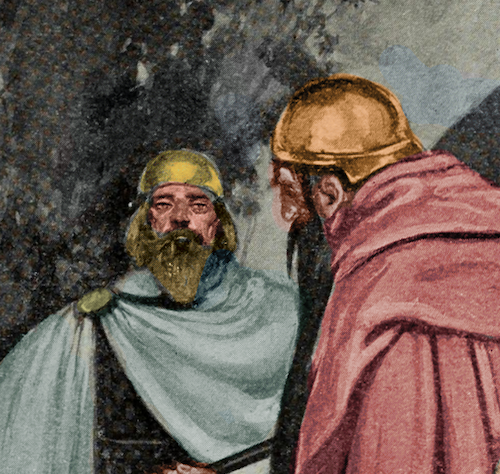 When mysterious beings come from the sky and land on the mountains of Connemara, the Fir Bolg of Ireland mobilise to oppose them.

Ireland will never be the same.

Over the coming weeks we’ll be bringing you the story of the coming of the gods and the battles they fought against men, and other supernatural beings.

Don’t miss The Dawning of the Dé on the Irish Mythology Podcast.

Featured Image – The Two Ambassadors – part of a depiction of the meeting of Sreng of the Fir Bolg and Bres of the Tuath Dé from the book Myths and Legends of the Celtic Race (1910) by Rolleston, T.W. (Partially colourised by Marcas).

May 2, 2020May 2, 2020 by irishmythologypodcast Categories: Uncategorized Leave a comment